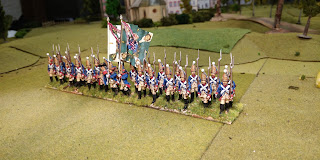 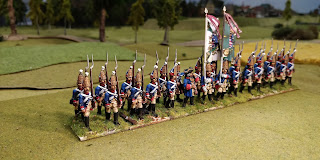 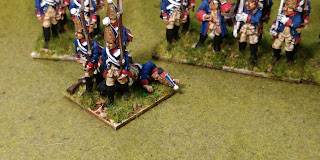 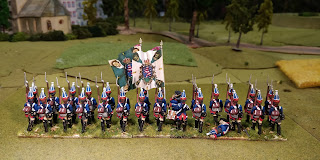 In 1760, when the new Landgrave Friedrich II reorganised his army, the three former militia regiments were reorganised into three "Garrison Battalions" of 4 companies each, and one standing battalion of "Garrison Grenadiers" of 4 companies. This is the latter and by the AWI this is Grenadier Regiment Rall of Trenton fame.

You can see from the attached schematic that the uniform is basically the same although some coat lace has been added and the mitre's back colours has changed. The green flag has been somewhat embellished as per the 'Prussification' of the army. Further worthy of note is the fact that while the mitre rear of other ranks was piped white, this piping is gold for NCOs.

This one-battalion regiment fought at the Battle of Warburg. In my Hessian army the regiments are normally of 2 battalions each of 500 men (5 bases per battalion) whereas I have made this stronger with 7 bases or 700 men. Figures are mostly Black Hussar with command from Foundry.

Posted by Painted Soldier at 03:03 No comments: 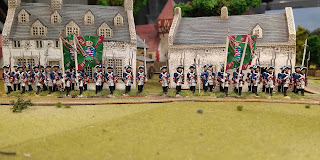 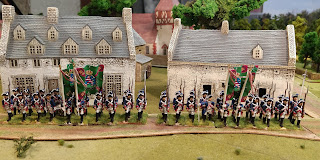 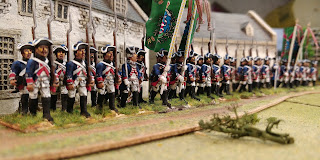 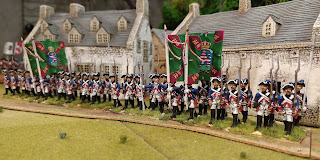 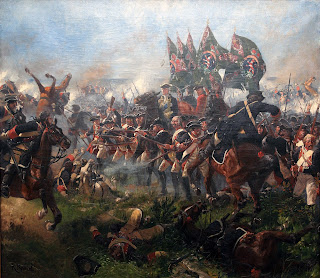 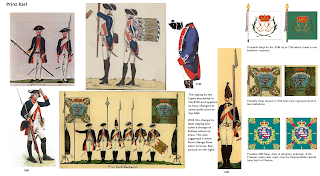 Here is the second regiment for my Hessian SYW army, Prince Karl. The Inhaber of this regiment remained the same person for the SYW through the AWI. There is also a well known painting of the regiment which shows an incident at the battle of Krefeld. Kronoskaf says “ On June 23, the regiment took part in the Battle of Krefeld where it was deployed on the right wing under the command of the Hereditary Prince. Towards the end of the battle, the Hereditary Prince and Gilsa rallied the battalion along with Wutginau Infantry and other Allied infantry units and advanced onto the plain. The Comte de Gisors at the head of 4 squadrons of the Corps des Carabiniers de Monsieur le Comte de Provence charged these advancing battalions who let them close in to about 20 paces before firing a devastating volley mowing down in an instant most of the first rank. A single squadron managed to break through but the third rank of infantry knocked it down (ie turned round)”.

My flags here are the AWI ones which are probably the wrong style of flags because at the time of the battle (1758) the regiment was a one battalion regiment with different plainer flags.


I have compiled a painting card to assist you in painting this regiment.

Posted by Painted Soldier at 03:23 No comments: 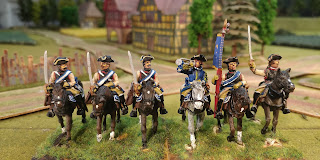 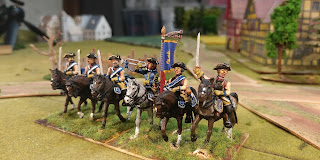 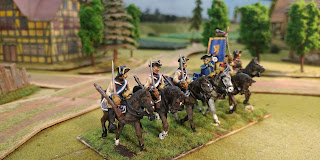 I have feilded these as cuirassiers in their post-1760 uniform. Although they were converted to cuirassiers the actual cuirasse does not appear to have been issued until after the end of the SYW. But I wanted to use the latest offerings from Black Hussar and so these are actual cuirassiers. If you want Prussian (or lesser smaller states') Cuirassiers then these are the best you can buy in 28mm. Each figure comes with a variety of sword arms you can chose from.

Posted by Painted Soldier at 05:47 No comments:

Email ThisBlogThis!Share to TwitterShare to FacebookShare to Pinterest
Labels: Cavalry 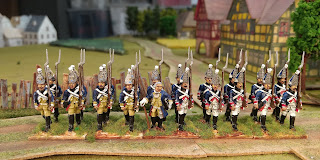 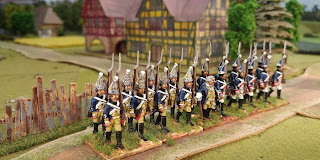 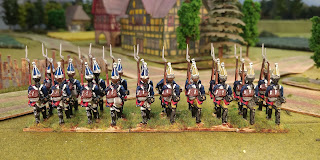 
Posted by Painted Soldier at 05:39 No comments: 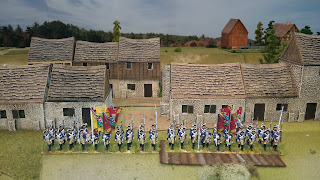 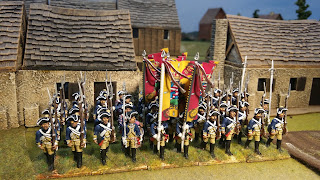 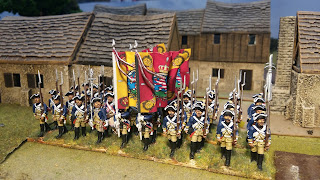 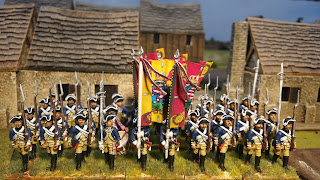 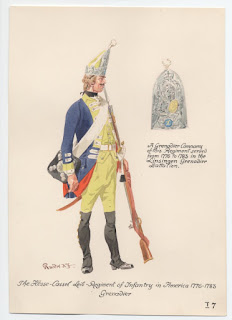 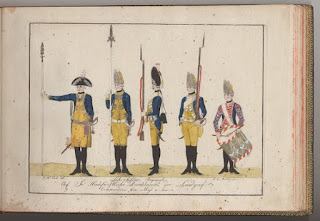 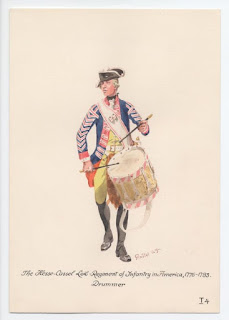 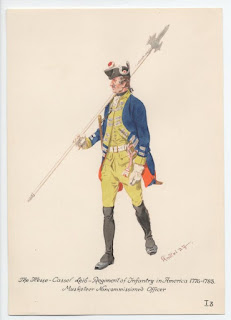 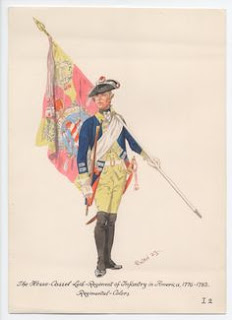 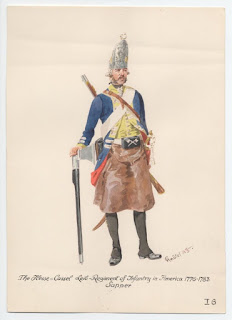 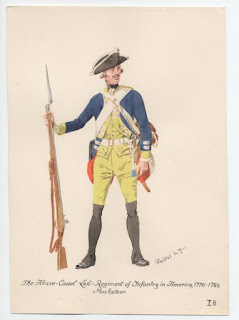 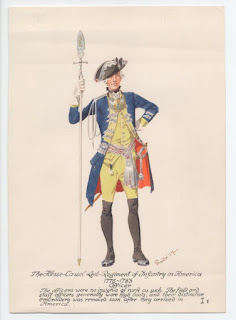 Regular readers of this blog will know that I am slightly obsessed with 18th century Hessians. This blog focused on Hessians in the early SYW but these new posts will concentrate on the late war. What I like about them is that they are a Prussian looking army but much smaller and feasible given that I have to paint both sides if I embark on a project. Add to that the fact that my second favourite army of this bewigged century is the French. Who could possible manufacture both sides? Well I am teasing you because my favourite manufacturer is Black Hussar who, incidentally, produce both Prussians and French for the SYW. The imminent arrival of Prussian Cuirassiers is most welcome too.

So here is the start of a small project (Hessians v French) for late SYW. When I say small, I mean similar sized to the WAS in Italy project which consists of about 12 battalions and 12 squadrons each side.

The other thing I like about Hessians are their bewilderingly colourful AWI flags. In 1760 the old Landgraf passed away and his son Friedrich II came to the throne. He was a Prussian General and inhaber of a Prussian Infantry regiment too. Already quite Prussian in it's look, he tinkered with the organisation and flags to make the army a mini-replica of his big neighbour to the East. The early flags, prior to 1760, I find a little bit dull. The post 1760 flags are much more Prussian in look but many details of what they looked like are unknown. With the AWI you would have thought that the fog of what the flags looked like might have lifted but sadly not. Many of the articles on the AWI flags captured are inconsistent with Prussian practice. A good article is here at
http://dupagemilitaryflag.com/Hessian_Flags.html

So what I am doing is a late SYW Hessian army with AWI flags. Some are conjectural as the Hessians only sent single battalions to North America whereas I will field double battalion regiments. Some questions remain as to what exactly was the colour combination of the Leibfahne and what was the colour combination of the Regimentfahne? I will try to follow the logic of the Prussian system but I admit there are many opposing views so this is just my interpretation. But you also have to just love the vibrant colour of the flags which came from http://FlagsofWar.com
Iain there is a great chap and he has resized the flags slightly for me so that they fit on the Black Hussar flagpoles. I think the artwork is even better than GMB's, which is saying something.


In terms of the uniforms, most will be based on the SYW late version but with this first regiment, I have gone with the AWI uniform. The late SYW version had pink facings which looked wrong with these flags whereas the sand/mustard yellow facings compliment the flags. And in the unlikely event that I ever do armies for the AWI, then these two battalions can be combined into one, less one set of flags.
Posted by Painted Soldier at 07:28 No comments:

I wanted to thank you all for your comments and for following the blog.
Posted by Painted Soldier at 23:02 No comments:

I have decided to sell off this collection. I just don't have the time to dedicate to it any more and my other blog takes up any free-time I have.

I will sell these figures on eBay if I don't get any interest here but meanwhile I have painted all these units you can see here:

5 battalions of 28 figures each.
5 companies of their grenadiers (each 4 figures)
4 extra 'dead/wounded' figures based individually.
One mounted c-in-c base.
One mounted officer
8 Horse in two squadrons.

I can add (but they are currently unpainted) two further battalions and 2 companies.
Some artillery.

Obviously I'd prefer that they all went to one home but I'm relaxed about sending them in different directions.

Feel free to contact me if you are interested at nigbil at free.fr
I'm looking at about GBP5 a figure.
Cheers

PS. I'll probably leave the blog in place without any further postings.
Posted by Painted Soldier at 21:14 No comments:

Promote Your Page Too 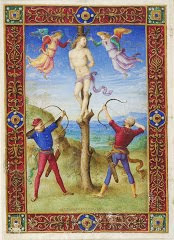 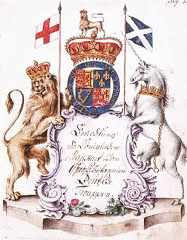